It’s not every school that can boast having a former Olympic flat-water canoeist as its head teacher, but Greenbank Preparatory School in Cheadle can, writes Malcolm Storer. 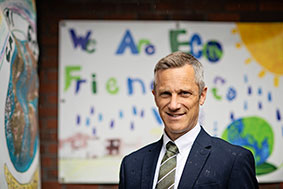 Malcolm Johnson took up the post two years ago, and already he is instilling into his pupils the same drive and determination that propelled him to become a member of the GB squad.

Intrigued, I went along to Cheadle to find out more.

Over a cup of coffee, I asked Malcolm about his journey from international canoeist to head teacher.

“I was born in Durham. My father worked at the university so, naturally, I grew up within an educational background, but I was also very keen on outdoor sports.

As Durham and Northumberland are rural areas, I soon discovered canoeing and kayaking. I was lucky enough to meet someone my own age who was junior British Canoeing Champion. I kind of tagged along and we ended up travelling the world together competing.”

After gaining a degree at teacher-training college in Chester, Malcolm moved to Altrincham Prep School where he taught PE. By now he had started to compete both domestically and internationally.

“I got to the stage in my early twenties where I had to make a decision; do I fully commit to canoeing, or carry on teaching? I decided on canoeing and moved to Nottingham where the National Water Sports Centre is based.”

Malcolm’s decision paid off and, after winning numerous races at prestigious regattas, he was inducted in the national squad.

“It was during the run-up to the Sydney Olympics in 2000,” continued Malcolm. “I didn’t go to the actual games themselves but trained with the team. I was building towards the 2004 Athens Olympics by competing in all the major international events such as World Cups, European Championships and World Championships.

Unfortunately, I did not make the team, but was sent out to Athens as a reserve. After spending four years pushing myself to the limit in training — even giving up butter on my toast for six months — that was a bitter disappointment.

Having said that, I really enjoyed going to Athens as I got to commentate for the BBC. I still commentate today, but mainly for Eurosport.

Funnily enough I count that as part of teaching; teaching is all about communication, which is something I’m passionate about.”

How did he cope with being dropped from the GB squad?

“There were many things I got out of that experience that I try to pass on to my pupils and staff.

I tell them that those are the things that really make you who you are; the challenging tough times you have to grapple with in order to develop as a person.”

After giving up competitive canoeing Malcolm got married and moved to Germany for a year where he taught at the International School.

Upon returning to the UK he got a job at Stockport Grammar School, teaching all the core subjects as well as running the junior’s cricket team.

Eight years later he moved to Cheadle Hulme School, taking up the post as deputy head.

From there it was a short hop across the road to Greenbank Preparatory School and his first headship.

Now, almost two years into the job, I asked Malcolm what he brings to the role of head teacher at Greenbank, bearing in mind the unique journey he has taken to get to where he is today.

“Matching ambition, drive and competitiveness with nurture and care.

This is a small school; it is a community; it is a school that knows its pupils really well.

Our job at Greenbank is to give children the correct building blocks so they can go out and achieve whatever they want in life.”        www.greenbankschool.co.uk

Find Local Businesses in Cheshire. Simply type the trade or service that you are looking for and click ‘search’.

We are currently in the process of putting together a series of superb money-saving offers in association with a cross-section of Cheshire businesses, ensuring our readers can benefit from the best deals available on a wide range of products and services. Make sure you can take advantage of these fantastic offers. Come back soon!