An eye for the finer things

Living with precious, delicate and expensive works of art could be a precarious business for Barry Hook. Not so for this fine art expert from Cheshire

Meeting Rachel Houston-Holland in her office in Wright Marshall is a test. It is the type of location where you could imagine the hapless Frank Spencer causing absolute mayhem.

The huge desk top is clear apart from a telephone, laptop and a sizeable ceramic vase which looks both expensive and vulnerable. On a shelf is a pretty, but fragile looking tea service. It looks to have all the resilience of a spider’s web. I tuck in my elbows.

Propped-up against the wall – well within the compass of my big feet – are a number of paintings. It is that vase, however, that looks unsafe and in peril as I begin to make notes on my tablet.

It’s not to say the office is untidy. What else would I expect but valuable artefacts in the office of the firm’s regional head of fine art? Rachel, herself, is delightful and disarming; completely at home. I am nervous and it must have shown.

Rachel tells me: “You look like the contestant on Masterpiece who picked up a valuable decanter, turned it upside down to see if there was a maker’s name on the bottom . . . and the stopper fell out!” Ouch! Now that is akin to Del Boy’s chandelier moment 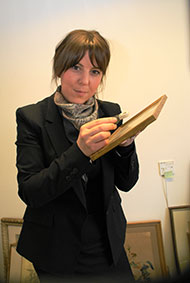 Masterpiece is a new daytime TV programme, devised by Alan Titchmarsh, on which Rachel is the co-presenter. The pair guide teams around stately homes as they try to determine which are the masterpieces hidden amongst everything else.

“We take great care to demonstrate to contestants how to hold objects but sometimes mistakes are made,” she says. That mistake was never broadcast.

She landed the prestigious TV job after being scouted as an auctioneer appearing for Wright Marshall on the ‘Antiques Road Trip. “I did a screen test and was then delighted to be asked to join Alan on the show. We filmed the whole series of twenty shows in blocks of three a day over a two week period.”

Rachel is the expert on the show demonstrating an encyclopaedic knowledge that only comes from an in depth study of the subject. She grew up in Whitegate but it was Liverpool where she started on the road to having an eye for the finer things in life, especially Asian art and ceramics.

After gaining an honours degree in fine art at Liverpool John Moores University, she spent the next two years working in a gallery on Albert Dock. It was then back to university, this time in Newcastle, to gain her MA in conservation of fine arts.

It was here that her knowledge of restoration work was practically honed as she joined a team from the university on what turned out to be an 8-week mission in Aberdeen. The team was charged with uncovering the paintings and murals of Victorian artist, Daniel Cottier. The walls and ceilings of the whole house had been covered by Cottier but in later years the paintings had been covered with Artex. Removing that without pulling off Cottier’s painting was tricky, remembers Rachel. When it did happen new paint had to be applied.

What truth will the magnifying glass reveal

Before joining Wright Marshall, Rachel spent over 6-years with Bonhams in Chester. And if you think that stumbling across a valuable, rare item in the attic is an impossibility akin to seeing a frost in July, Rachel can put the lie to that old chestnut.

“I was conducting a routine insurance valuation and came across a 17th century Chinese figure which was later sold at auction for £400,000. I think that was the highlight of my career.”

Most of her days are spent visiting clients and advising them, cataloguing items and eventually standing on the podium, gavel in hand, auctioning. The thought crosses my mind that scarcely ever could you telephone a TV personality and ask them to visit you. You can do exactly that with Rachel and here is her number: 01829 262150. She will be happy to come and have a chat about your items – valuable or not.

“We are finding we are getting younger buyers who have realised that they can furnish their first home from our sale rooms much cheaper than visiting Ikea. As a company we are appealing to a different market and we are having to respond with different ideas.” She cites this year’s inaugural ‘Boutique Sale’ as being a ‘roaring success’.

“I have never seen so many people in years. There were cuff links, men’s watches, Hermes handbags, high end fashion dresses and jewellery including fine jewels, some of which went for as much as £10,000.” The next Boutique event will take place on 9 July with a closing date for items in the middle of next month.

I sidled out of the office, not daring to look back at the tea set, the vase and those paintings.

Find Local Businesses in Cheshire. Simply type the trade or service that you are looking for and click ‘search’.

We are currently in the process of putting together a series of superb money-saving offers in association with a cross-section of Cheshire businesses, ensuring our readers can benefit from the best deals available on a wide range of products and services. Make sure you can take advantage of these fantastic offers. Come back soon!